How Large Is A Zone?

In my last post I blogged about the zone distribution cabling deployment model in the data center. I received questions asking how large a zone would be. The immediate answer is, it depends. However, research I did may help to answer it further.

My research was the study on balanced twisted pair cabling channel lengths in the data center. The data was from CommScope’s sales database of SYSTIMAX® InstaPATCH Cu pre-terminated copper cabling used in data centers. The data:

• Was North American-centric but included other regions as well.

I plotted the study’s results in the following figure. The horizontal axis of the chart represents for the buckets of cabling channel length. Each bucket is in the range of 30 feet. For example, all of the channels between 0 to 9 meters long fall into the first bucket. For each length bucket, a group of three vertical bars shows the probability for years of 2009, 2010 and 2011, respectively. The probability number of each length bucket is displayed on the left vertical axis. For example, approximate 27% of the copper channels in either 2009, 2010 or 2011 were between 18 to 27 meters long. The three color-coded curves stand for the accumulated probability of any given length and below for year 2009, 2010 and 2011, respectively. The readings for the curves are on the right axis. For example, as indicated, approximately 89.5% of the channels deployed in 2009 and 2010 were equal to or less than 46 meters. 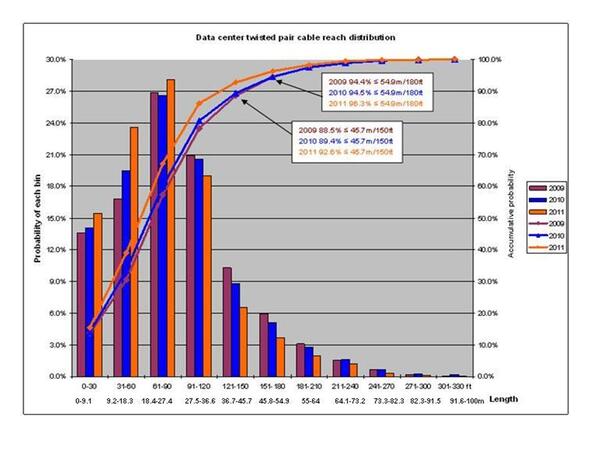 A key finding here is that approximately 56% of the balanced twisted pair cabling channel lengths in the data center are between 18 to 46 meters long. In other words, end users have real needs of deploying access network connectivity length in the range of 18 to 46 meters. This length range is very suitable for utilizing the zone distribution cabling model as shown in my last blog. Based on this finding, I estimate the size of a zone would be in the range of 100 to 300 square meters.

In my opinion, the deployment of 10GBASE-T cabling would follow the similar distribution shown in the figure. In other words, cabling for 10GBASE-T network in the data center may more likely use the zone distribution model as well.

SYSTIMAX GigaSPEED Xpress copper solution supports 10GBASE-T up to 60 meters, which covers more than 95% of the probability of copper channel length according to my study here. The GigaSPEED Xpress 88 Series cables, with a Category 6 size profile, are up to 50% smaller in size. Stated another way, other U/UTP, F/UTP and STP cables are up to 100% larger than the GigaSPEED Xpress 88 Series cables. In addition, SYSTIMAX GigaSPEED X10D solution can fulfill end user’s needs on any length beyond 60 meters. To my knowledge, X10D cables offer one of the smallest cable diameters in the market, which may provide the great customer experience in cabling deployment.

What size is your zone?