According to Joe Freddoso, president and chief executive officer, MCNC, institutions in rural areas of North Carolina (i.e., schools, universities, community colleges, libraries and public health facilities) were quickly going to run out of the bandwidth they required. With the need for broadband increasing by almost 40% every year, a high-speed broadband infrastructure did not even exist to keep up with the demand. Something needed to be done, and so MCNC stepped in two years ago and began going after grants that would help construct a high-speed broadband infrastructure, giving hope to those living and working in the state’s rural areas.

This was an exciting day, especially for CommScope, which has been working with MCNC since Phase 1 began in 2010. CommScope is proud to be part of several broadband initiatives around the country, bringing high-speed networks to rural and underserved communities. MCNC and its efforts to expand the North Carolina Research and Education Network through the GLRBI is just one great example. If you consider the numbers of people GLRBI will reach, you quickly realize how important this project is to the state. It has the potential to directly serve more than 1,500 community anchor institutions (i.e., schools, community colleges, universities, libraries, public health and public safety facilities and non-profit and university hospitals). This new broadband infrastructure will also deliver high-speed broadband to approximately 180,000 businesses and more than 300,000 underserved families—people who truly need it and will benefit from it.

Two major topics were discussed by many of the dignitaries during the event—jobs and education. U.S. Senator Kay Hagen touched upon both when she said that broadband has become the “great equalizer when access is just a mouse click away.”

Freddoso added, “It will broaden the way teachers teach, students learn, doctors provide care and for citizens at a local library searching to find a job.”

CommScope understands the numerous benefits one can have by accessing information using high-speed broadband. Having access to information will give students and businesses the ability to compete successfully with others around the globe. This project is a testament to the need for increased access to high-speed broadband. CommScope and the employees involved with this project are proud that our fiber optic cable, conduit and other materials and services are helping make this a reality.

In today’s world, high-speed access is no longer a luxury. 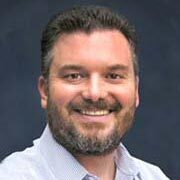 Joseph is a graduate of Northeastern University and is a member of the Public Relations Society of America.