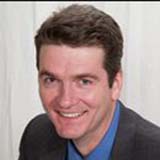 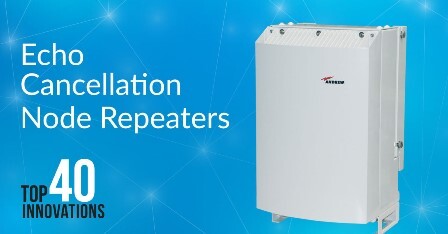 Note: As part of its 40th anniversary observance, the CommScope team set out to identify the top 40 innovations that have come from CommScope (or one of its acquired companies) over the past 40 years. We are unveiling the innovations chosen for the Top 40 on CommScope Blogs through early January. Read more about the overall program and selection process in this November 4 post.

We continue today with our unveiling of innovations—in alphabetical order—that are ranked 11-20. You can see a list of the Top 40 innovations already revealed on our 40th anniversary page. As our 40th anniversary year draws to a close, we hope you enjoy looking back at what we think are our top innovations—ones that have helped build the world’s infrastructure of today and tomorrow.

Definition: Node repeaters were the first cell site repeaters to use digital on-frequency technology with echo cancellation. Echo cancellation involves sampling a portion of the transmitted signal and comparing it with the received signal. If echo is detected, the digital signal processing (DSP) system subtracts part of the echo to create donor/coverage antenna isolation without the need for physical separation.

Created by the advanced development department of Andrew Corporation (now CommScope Technologies LLC), Node repeaters were introduced in 2003 and were the first cell site repeaters to use digital on-frequency technology with echo cancellation. Digital signal processing (DSP) was used to filter base station donor or mobile signals, to equalize donor link fluctuations by maintaining constant pilot power in the repeater zone, and to cancel the echo between coverage and donor antennas.

One of the problems in repeater installations is that the incoming (donor antenna) frequency is the same as the outgoing (coverage antenna) frequency, and this creates a lot of interference if the antennas are not isolated well enough. Andrew’s previous Extend-a-Cell product translated the donor antenna signal to a different frequency so it didn’t interfere with coverage antennas. Node repeaters cancel or eliminate a portion of the echo with a DSP-based cancellation scheme.

Echo cancellation involves sampling a portion of the transmitted signal and comparing it with the received signal. If echo is detected, the DSP system subtracts part of the echo to create donor/coverage antenna isolation without the need for physical separation. Prior to echo cancellation, mobile operators would have to physically separate donor and coverage antennas on a platform with a shield between them, which led to large tower-top deployments. The Node repeaters made it possible to have a compact installation that would fit on a regular pole, instead of requiring a platform.

Mobile operator licensing requirements mandated that operators offer coverage to a certain percentage of their operating footprint. Base station deployments cost about $1 million, and operators were looking for less expensive ways to extend their coverage areas. Extend-a-Cell repeaters accomplished antenna isolation by changing the frequency of a donor antenna's signal for consumption by coverage antennas. Node repeaters accomplished isolation with DSP-based echo cancellation.

Node repeaters enabled operators to extend coverage for a tenth of the cost of adding new base station-based cell sites. In addition, because they eliminated the need for physical isolation between donor and coverage antennas, the Node repeaters enabled construction of more compact, less obtrusive, and generally more cost-effective cell sites. DSP-based echo cancellation is superior to analog processing because DSP components generally get cheaper every year, and device density increases every year, so manufacturers can pack a lot of processing power into a very small and economical chip.

The Node repeater’s digital echo-cancellation technology was used in a series of products from Andrew Corporation and CommScope. The Node-M, released in 2003, was sold to UMTS carriers in Europe. The Node-C product was released in 2004 to support CDMA networks in the US, India and Australia. The Node-G was released in 2006 for GSM networks. The technical innovation and market success of these products laid the foundation for successor digital filtering and distribution products like the Node-A, Node-AM, and ION-E DAS product.

Andrew Corporation was an established leader in the repeater market with its prior Extend-a-Cell product. Node repeaters established the use of digital signal processing within RF repeater and DAS systems where signal analysis was enabling the installation of the systems without the need for any external measurement equipment. Node repeaters contributed to the company’s continued leadership and led to incorporation of digital filtering in CommScope’s ION-E unified wireless infrastructure. Andrew Corporation led the charge in the use of DSP in cell site repeaters, and it spelled the end for analog repeaters in the market.

Thomas Kummetz is vice president of research and development for the Distributed Coverage and Capacity Solutions (DCCS) segment of CommScope. Thomas joined CommScope through the acquisition of Andrew Corporation in 2007. Collectively, Thomas has served Andrew, Allen Telecom, and Mikom for over 21 years – leading R&D teams in the research and development of advanced Distributed Antenna Systems (DAS) and RF Repeaters. Thomas holds multiple patents in areas of DAS and RF Repeaters and leads the segment’s patent activities and IP portfolio management. Thomas has a Ph.D. in Electrical Engineering from Ulm University, a M.S.E.E and B.S.E.E. from the University of Braunschweig as well as a Certificate in Technology Leadership from the University of Virginia.

What is the connection between 5G beamforming antennas and Transformers? Read this blog from Mohamed Nadder Hamdy to find out.